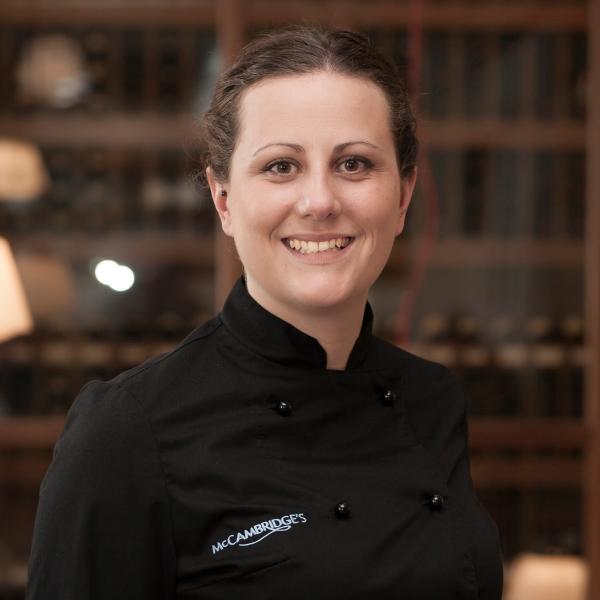 “I’m not a fussy chef” is how Heather Flaherty describes her cooking in her role as Head Chef of McCambridge's in Galway. Her responsibilities in McCambridge's include running the upstairs kitchen and the restaurant deli and sandwich bar, and she relishes the work in retail as well as in the kitchen itself. McCambridges is one of those establishments where people are happy to form a queue running down the stairs and out the door, so it’s quite surprising to find a young slip of a girl running the show. But once you speak to Heather or hear her speak, you realise there is steel behind her slight frame. “I come from a matriarchal family of hostesses” she says of her upbringing in Saskatoon, Saskatchewan in Canada. She put herself through college by working in kitchens, came out with skills in both performing arts and animation, but decided to stick to cooking and re-qualified through the Bachelor of Business & Culinary Arts in GMIT. Since then she’s been making a name for herself in Galway, working with Ulrich Hoeche in the Connemara Coast, who, with Michael Mullholland she credits as being a great influence on her style - making everything from scratch. She was head chef in Gourmet Tart company, and now heads the team in McCambridge's. Teamwork is a word that she mentions frequently “Nobody is more important or has more standing than anyone else in a kitchen. I say to people that I need their help, and if anybody can do it better, let me know.” She has been rewarded with loyalty from her crew, some of whom have worked with her throughout her career so far. One of her favourite dishes to cook is Irish Stew “it’s so clean and pure in its flavours. I believe the best food is simple, rustic and traditional. Our mothers and grandmothers had it right.”